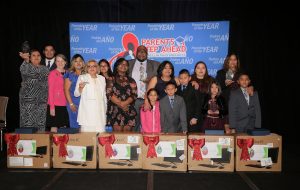 Community leaders, academic leaders, corporate executives, families and students came together to celebrate the 12th Parents Step Ahead (PSA) Parent of the Year Awards Ceremony honoring parents whose involvement in their children’s education distinguished tem above all others. The gala event took place on December 8th 2017 in Dallas, Texas.

Since 2006, PSA has honored parents and legal guardians from school districts throughout North Texas. To qualify for the Parent of the Year Award, parents or guardians were required to be an active volunteer at the schools where PSA produces parent programs during the year. Each school was asked to nominate up to 10 parents for the “Parent of the Year” Awards. To complete the nomination process, parents submitted a letter stating why it is important to be actively involved in their children’s educational life. Their son or daughter were also required to submit a letter stating why their parent should be selected as a “Parent of the Year.”

A panel of judges comprising of local and national community and corporate leaders selected the winners from the following schools: Bowie Middle School, Sam Houston Middle School, Sudie Williams Elementary, McArthur High School, Farine Elementary School and Brandenburg Elementary School. One honoree from each of these schools was recognized as a 2017 “Parent of the Year.”
This year, JCPenney provided to the parents, their children as well as the keynote speaker, a head-to-toe look to wear to the event along with a beauty makeover by consultants from the retailer’s Sephora, inside JCPenney and The Salon by InStyle.

“We believe parents are the foundation of their children’s future and are the key to their success in life,” says Lupita Colmenero, President and Founder of Parents Step Ahead. “Studies show that the more parents involve themselves in their children’s life and education, the greater the likelihood their children will succeed,” This year’s ‘Parents of the Year’ honorees are a source of inspiration for us all. In addition to their recognition at this year’s Awards Dinner Celebration, we are grateful our honorees were pampered on their special day thanks to the generosity and commitment of our partner, JCPenney.”

This year, PSA was delighted to have the 2016 CNN Hero of the Year, Jeison Aristizabal as the Keynote speaker.

Aristizabal was born on July 5, 1983 with cerebral palsy. During his childhood and adolescence, he endured long periods of rest, post-surgical in bed and in wheelchairs. During his school years, he was a victim of bullying by other students. He was socially isolated and faced adversity which led to lack of opportunities. However, with the unconditional support of his mother, he overcame the social barriers that were presented throughout his childhood. This led him to become a strong advocate and eventually to create a nonprofit organization to help others. In 2001, he founded the Association for the Disabled of the Valley in his home garage providing life opportunities to children with disabilities in the District of Aguablanca in the city of Cali, Colombia. In 2006, he participated in a national TV reality show called “Tengo una Ilusión”, and became the winner of a house that he uses to provide special services for over 150 children.

In 2016, CNN INTERNATIONAL network honored Aristizabal as CNN HEROE of the YEAR. This international recognition broadcasted live on CNN opened doors to him worldwide allowing him to manage the foundation and benefit more children. Aristizabal is currently studying law at the University of Santiago De Cali, in hopes to continue training professionally with the aim of contributing to improve the quality of life of children with disabilities.

The 12th Parent of the Year was a success thanks to the collaboration and support of partners, sponsors, staff, parents, and teachers. Pinnacle Group provided each winning family with a desktop computer and Hewlett Packard Enterprise provided laptops to the children that nominated the winners. PSA thanks its partners for making it possible to celebrate and recognize parental involvement in schools. American Airlines, NISSAN, Goya Foods, Walmart, JCPenney, Pinnacle Group, Hewlett Packard Enterprise, ETS, McDonalds, LATINA Style, Inc, Comerica Bank, Polsinelli, Frito Lay and Southwest Airlines. Without their support and contribution this program would not be possible.